The top-class Greyhound Racing action continues apace this weekend as the roadshow moves on to Romford where the heats for two of the biggest competitions of the year get underway at the Essex venue.

The Coral Romford Puppy Cup carries a prize fund of £10,000 and was first run in 1975. The competition is one of the leading races for greyhounds under the age of two and carries the join second-highest prize fund for puppies behind the Ladbrokes Puppy Derby an equal with the Puppy Derby. Staged over a distance of 400m, the competition has been won in recent years by the likes of Droopys Brindle (2015), Grays Cup winner (2018) and Young Princess (2019).

The opening heats of the Coral Champion Stakes also take place on the same card. First run at Wimbledon in 1947, the event was discontinued in 1973 before being resurrected at Romford in 1988. The contest is staged over a distance of 575 metres for the stayers and also carries a prize fund of £10,000. Mark Wallis has trained three of the last five winners of the event and has a number of exciting prospects this time around.

Sign up to Star Sports and get a free matched bet up to £50 if selected event/result occurs.

Endured a nightmare passage at Central Park last time out when meeting all sorts of trouble. He had previously finished fifth to the exciting Adageo Blue at Romford despite showing good early and those two efforts can be forgiven. He has posted an excellent trial time and this looks a good opportunity to get on the scoresheet.

The subject of glowing reports from his up and coming trainer Nathan Hunt. He hosed up by five and three-quarter lengths in a trial for this competition last week before posting a lovely trial time earlier this week. He makes plenty of appeal given his liking for the track and is well drawn too.

This looks a very trappy hear, but Bubbly Magnum has been doing the business nicely in his heats winning by a combined 30 lengths in three runs. He looks the one to be on.

Dave Mullins’ dog has plenty of experience at the track and did well to win last time despite meeting trouble in running. He bolted up by over five lengths on that occasion and looks the one to beat in this heat.

One of the leading fancies for the whole competition. He was third to Our Boy Seamus last week but met all sorts of trouble. A reproduction of his six-length romp last month with this draw in the red jacket likely to suit.

He’s been putting the champagne on ice of late, but this looks a good opportunity for Bubbly Bollinger to regain the winning thread. He started as an odds-on favourite last week but met all sorts of trouble. He is better than he showed there and can show his class in this.

He should prove tough to beat in the opening heat of the Champion Stakes. He was fourth in the Summer Stayers Classic semi-final at Monmore and boasts solid form at Romford in his back catalogue. He can continue his winning ways.

Looks the one to beat if he can replicate his impressive victory over course and distance in August. He disappointed last time but he was slow away and could never make up the ground. He deserves another chance here.

Summer Stayers Classic semi-finalist who bolted up on his return to Romford last week. She is a dog with bundles of ability and a reproduction of that effort will make her very tough to beat.

This looks a trappy heat but this dog is well drawn and looked smart in two victories at Romford earlier this year. He met trouble in running last time out and could be capable of taking home this prize.

Exciting prospect who boasts plenty of winning form at Romford. She was brought down on her latest start and that is very easy to forgive. This looks a good draw and shows bags of early. If she breaks well, she should win.

Returned to form with an easy success over course and distance last time out. He was dropped into an S1 there and needs to show he can still mix it at Open Race level. He always shows good pace and if on a going day, he looks the one to beat.

Next Best (Second best bet of the evening): 6:28: Our Boy Seamus

Queen Jessiej to be a right ROYAL winner of the Swindon Oaks final at... 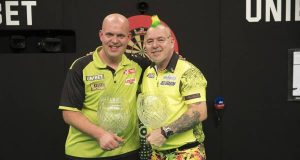