The jewel in the crown of greyhound racing continues on Saturday evening at Nottingham with the second round of the Star Sports/Arc Greyhound Derby.

The biggest and best competition in the racing calendar, the contest has a rich heritage which dates back to 1927. First held at White City Stadium, the race moved to Wimbledon Stadium in 1985 and then Towcester in 2017, before transferring to Nottingham in 2019.

Only four dogs have won the contest twice, Mick The miller, Patricias Hope, Rapid Ranger and Westmead Hawk. This year’s event is staged over 500 metres and boasts 96 fantastic entries.

The competition schedule is as as follows: Second Round (10 October), Quarter Finals (17 October), Semi Finals (24 October) and Final (31 October).

The Bet readers have been enjoying a sensational time of things at present with 50 of our last 70 selections winning. In our last column, we fired in four winners from eight winning tips at odds of 4/5, 11/8, 3/1 and 7/2.

We have previewed the second round of the competition which features ante-post favourite Newinn Session opening proceedings in the opening heat.

Great betting offer are also available from our pals at Star Sports who are also SPONSORS of the Greyhound Derby 2020.

A quite sensational opening heat of the second round as ante-post 6/1 Derby favourite Newinn Session takes on 12/1 second favourite Lenson Bocko. Trained in Ireland by Pat Buckley, Newinn Session recorded an easy success in his heat last week, which Lenson Bocko will needs to improve on a second-placed effort. With that in mind, Newinn Session gets the verdict and can back up his impressive win in the opening round.

Another exciting dog trained by Irish maestro Graham Holland. He bolted up by two and three-quarter lengths last week showing good pace through the middle of the race to score decisively. A slight concern is the draw, given he is in trap five this week, compared to trap one last week. However, he can be very quick away and if showing the same pace as he has in his native Ireland, he should prove very tough to beat.

A general 20/1 shot for Derby glory, Southwood Jet was one of the most impressive winners of the opening round. He showed electric early pace and bolted up four and three-quarter lengths. That win came in a smart time and despite being drawn in the blue jacket this time around, he makes plenty of appeal.

Another dog trained in Ireland by Graham Holland who looks to hold leading claims. He showed smart pace and was always in control in his heat last week. A draw in trap three looks ideal and he quickened up smartly to win easily last week. Given the manner of that win, he looks the one to beat.

Doolin Duke was arguably the most impressive winner of the opening heats with a devastating 12 and a half-length romp. He broke smartly and was not for catching. His draw looks ideal and it would have to take a seismic performance from one of his rivals to stop him winning again. Coolavanny Chick scooted up three lengths in his opening heat last week and is well-drawn in trap six. However, given the manner in which Doolin Duke breaks, he will have to be quick away, giving the verdict to the Duke.

Beware of the Wolfe. A 14/1 shot for the Derby following his seven and three-quarter length success last week. He broke smartly and was not for catching from the second bend. He may have preferred trap one and will need to break well again to deny Savana Cody who has bagged the red jacket. He was equally impressive last week scoring by a length and three-quarters and this race could develop into a straight shootout between the pair. Narrow preference is for the Wolfe given he posted a quicker time in testing conditions last week.

Another fascinating heat. Glengar Bale is now a 14/1 chance for Derby glory following a sensational performance last week when scoring by four and three-quarter lengths.  He posted one of the fastest times of the competition with that effort and he makes plenty of appeal from his plum draw in trap five for Pat Buckley. Bockos Doomie has drifted out to 22/1 to land the Derby having only finished third to Newinn Session last week. However, he is perhaps better drawn this time around and should improve. He looks the main danger, but Glengar Bale looks one of the best bets of the night.

An interesting finale to the second round of the Greyhound Derby. Gonzo could not have been more impressive when routing his rivals by three lengths last week. He clearly relishes this draw in trap six and that win came in a smart time. A 16/1 shot for Derby glory, he could be one of the most exciting British-trained dogs in the competition. Dangers lurk in the form of Blue Tick George who posted an impressive success in the opening round along with Deanridge Rapid who was very slow away, but still managed to finish third in his opening heat. However, they both need to take another step forward to win this.

Get ready The Bet readers for this week DONNY DONZEN 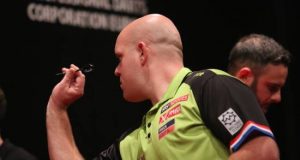 Van Gerwen & Cross Go Head-To-Head Away Ahead Of BoyleSports Grand...